In 2013 the ACNC conducted some research into Public trust and confidence in Australian charities. They kindly published the data to the http://data.gov.au website. The survey was created to understand the public attitudes and current levels of trust surrounding charities in Australia. It also collected information about awareness of and support for a national regulator (the ACNC).

The following analysis aims to see where Australian confidence was in 2013. I’ll then aim to follow up with some further analysis based on the survey that was conduted in 2015, and then when data is released see if we can start to plot some trends with the inclusion of the 2017 data.

This analysis will only look at the trust and confidence aspects, as I’m less concerned about the regulator and it’s role, and more concerned with how Australian’s feel about charities and how those charities could specifically be addressing those issues.

There is a lot of data that can be analysed within the survey and a lot of different splits of the results based on demographics and a persons association and involvement with charities. For the purpose of this blog post I’ve kept it simple aiming to look at just the trust ratings. 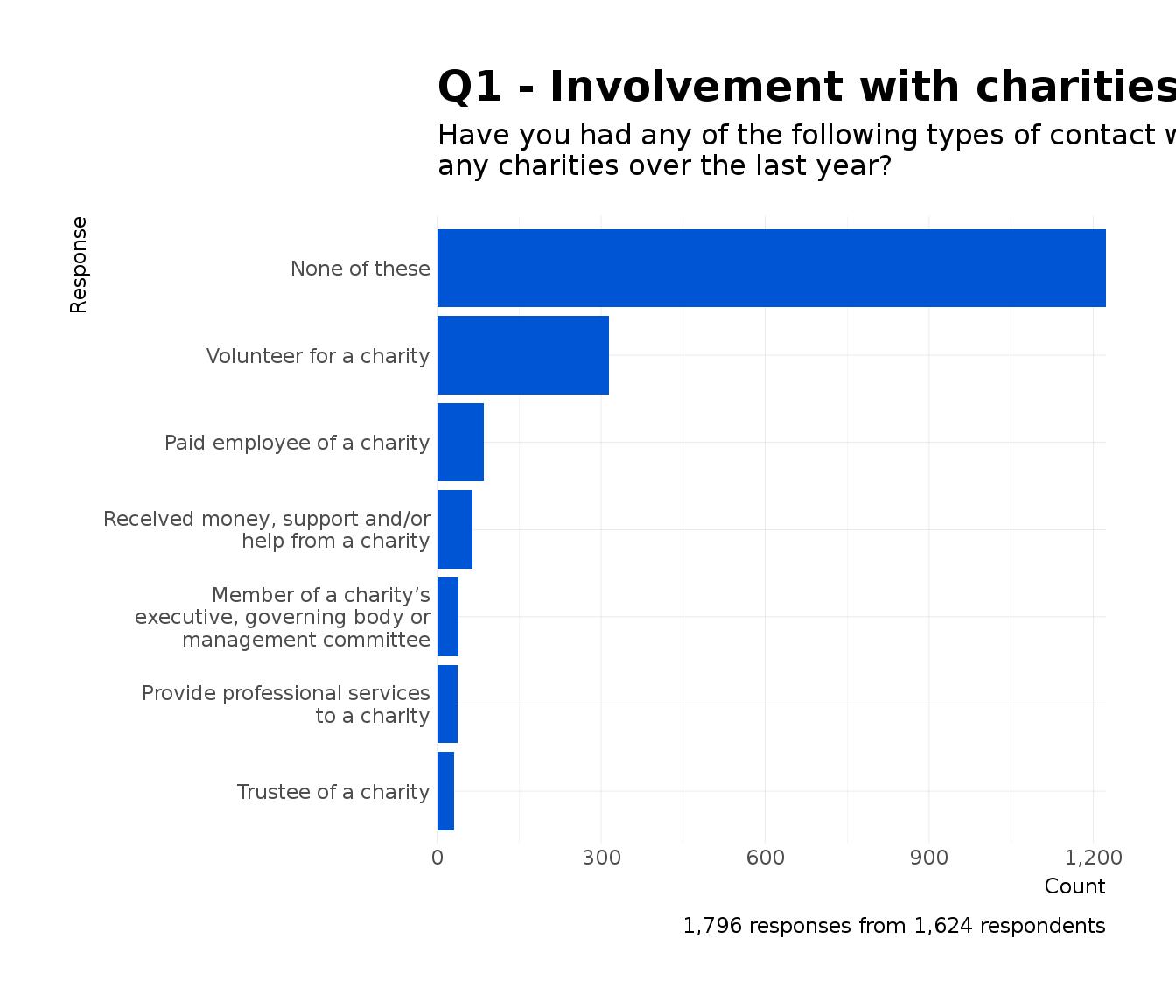 Looking at the 19% of Australians that volunteer with charities (314 responses from the 1,624 respondents) we can see that about 59% of volunteers do so on at least a fortnightly basis. 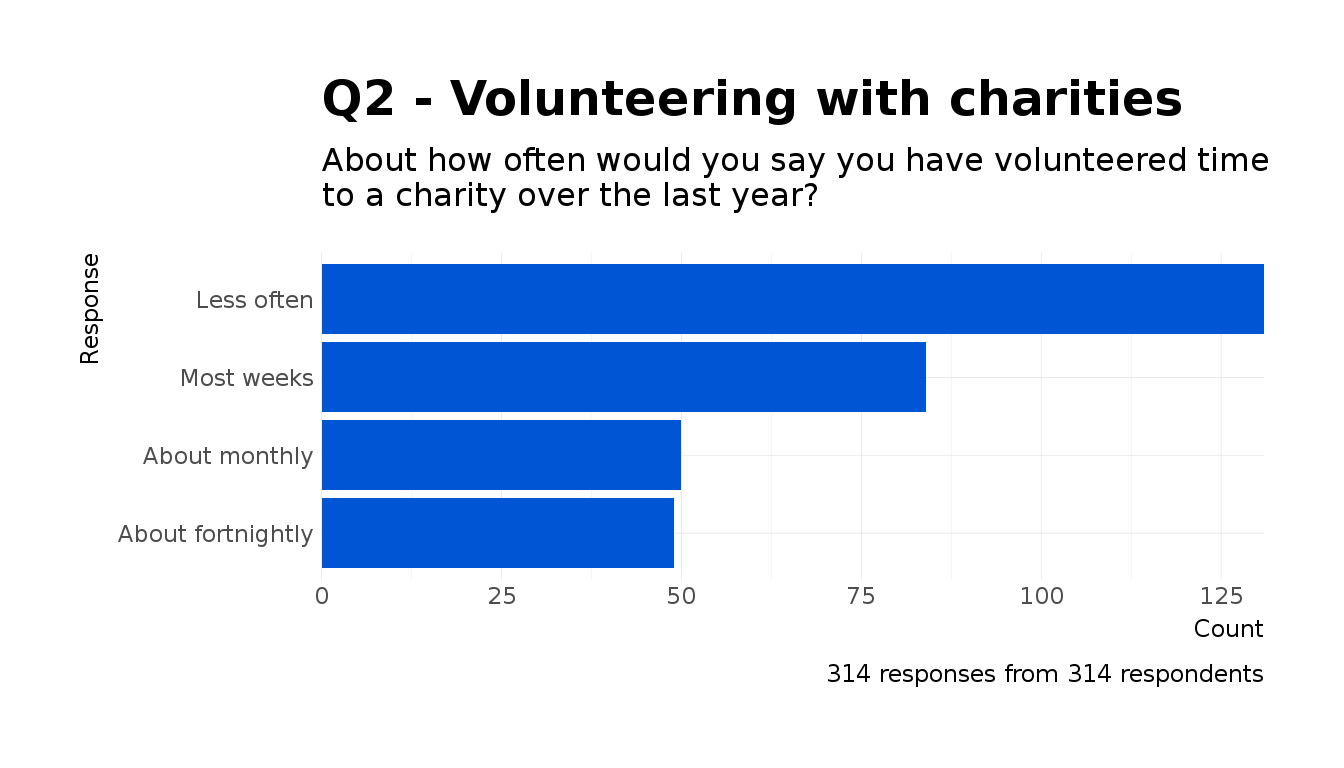 At first glance it looks like about half of the responses are for some form of donation or fundraising contribution to the charity, however the total is more than the sum of the respondents. 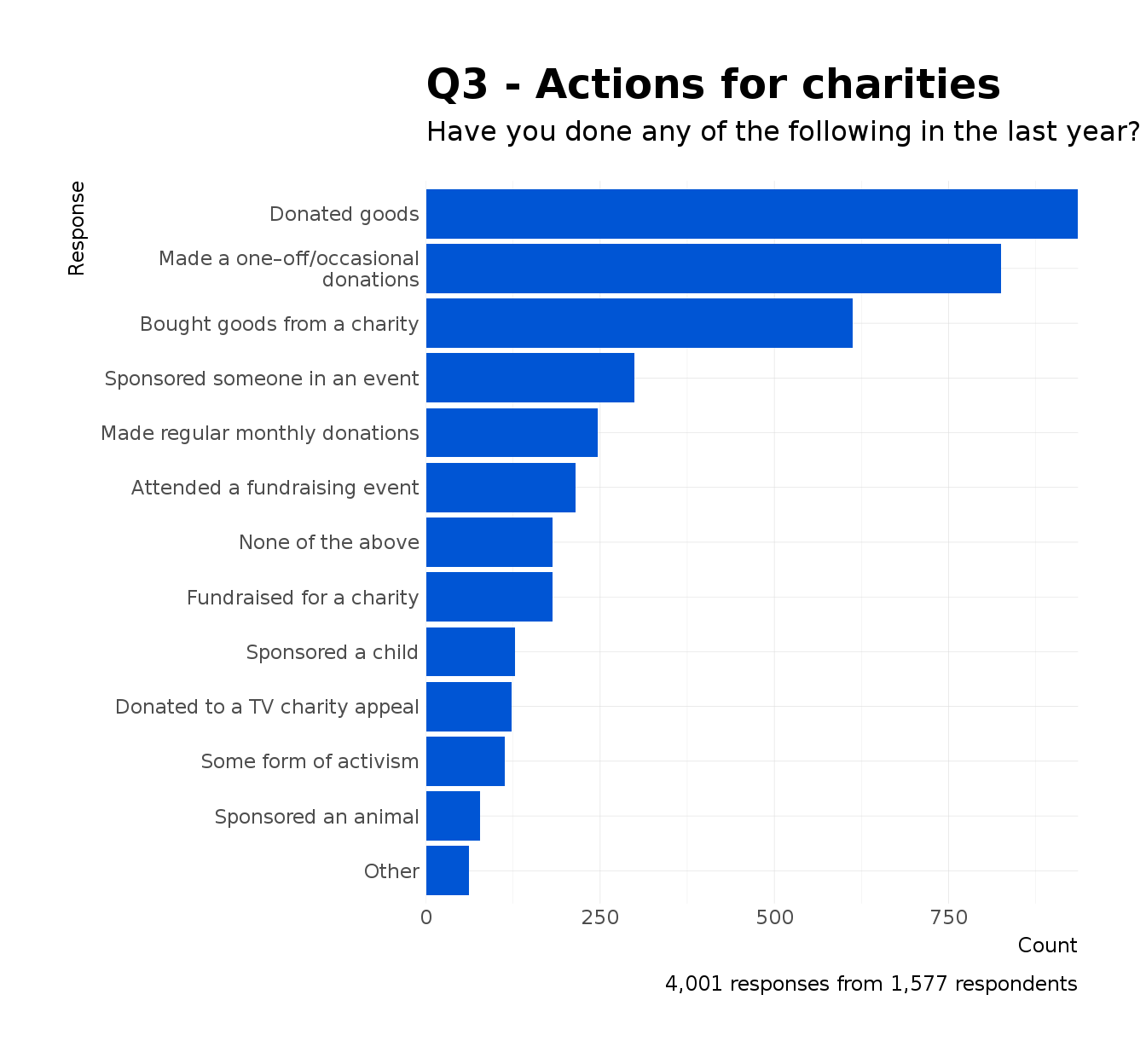 The chart below shows how many fundraising initiatives the respondents participate in. 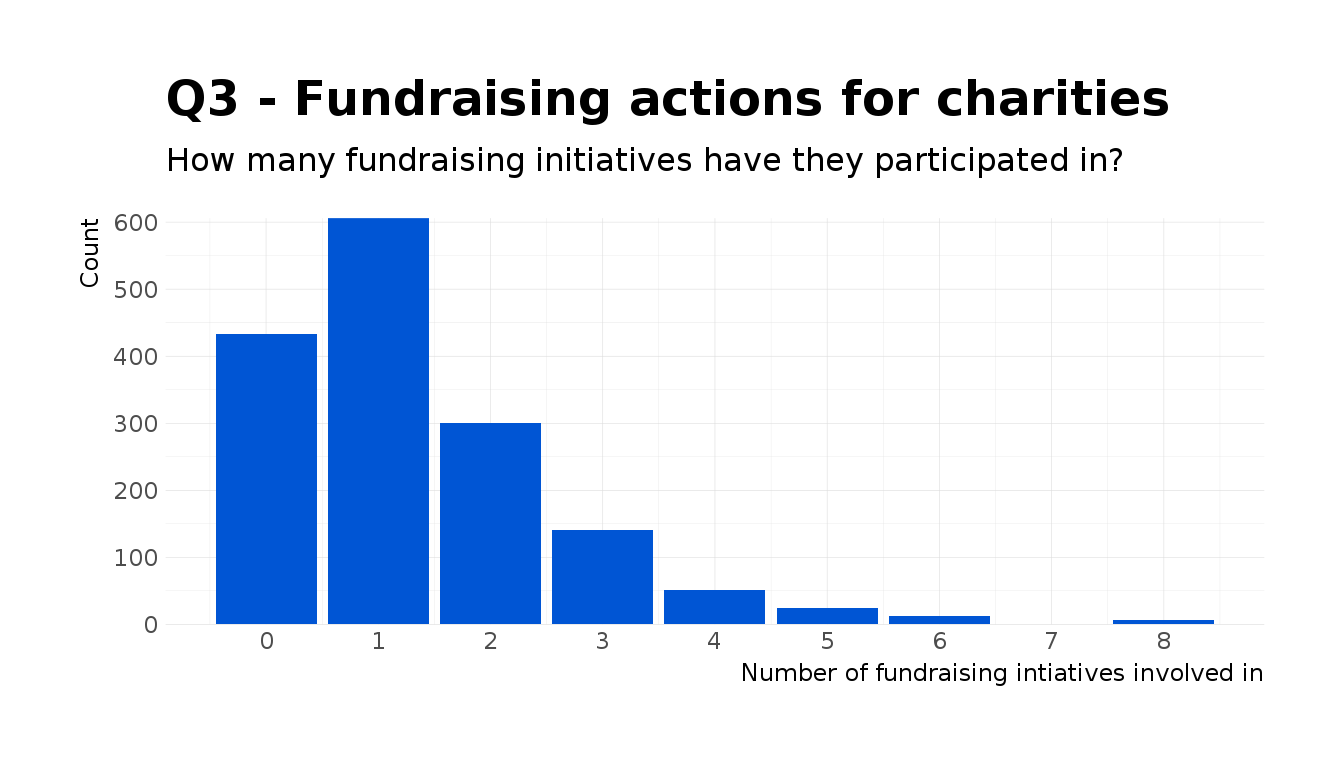 Many of the reasons for support seem like relatively obvious reasons, although quite often there does seem to be a perception amongst fundraisers that people support because they have a personal connection, or they know somoene who was supported by the charity. These two reasons had fairly low responses, however this may vary widely depending on the charity being supported. 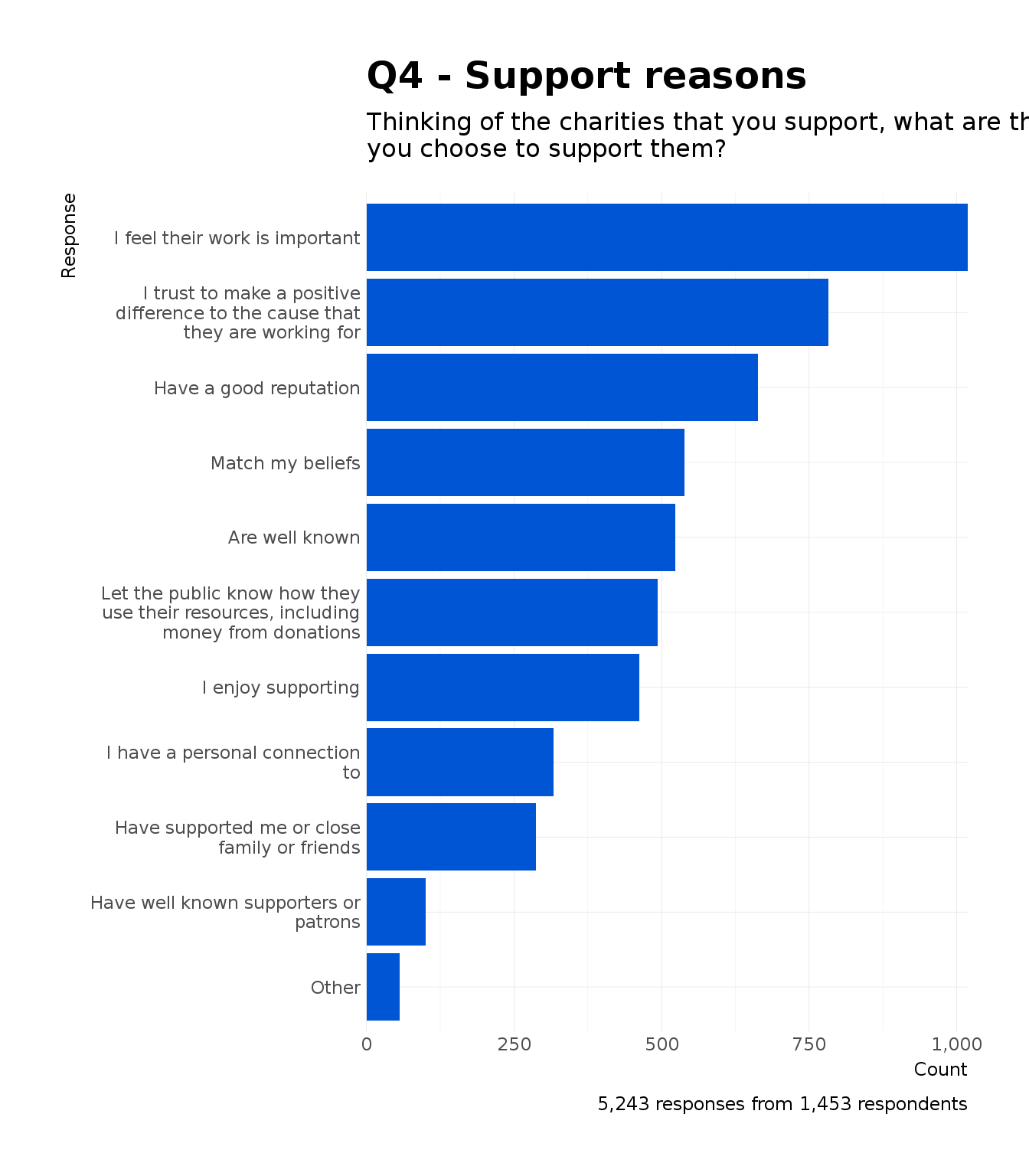 Question 5 focuses on our knowledge of the charities that we support. Based on responses we indicate that we seem to know a good amount about them. This will certainly be a good response variable to overlay with the trust and confidence aspects of the survey. If we know more about the charity, do we trus them more? 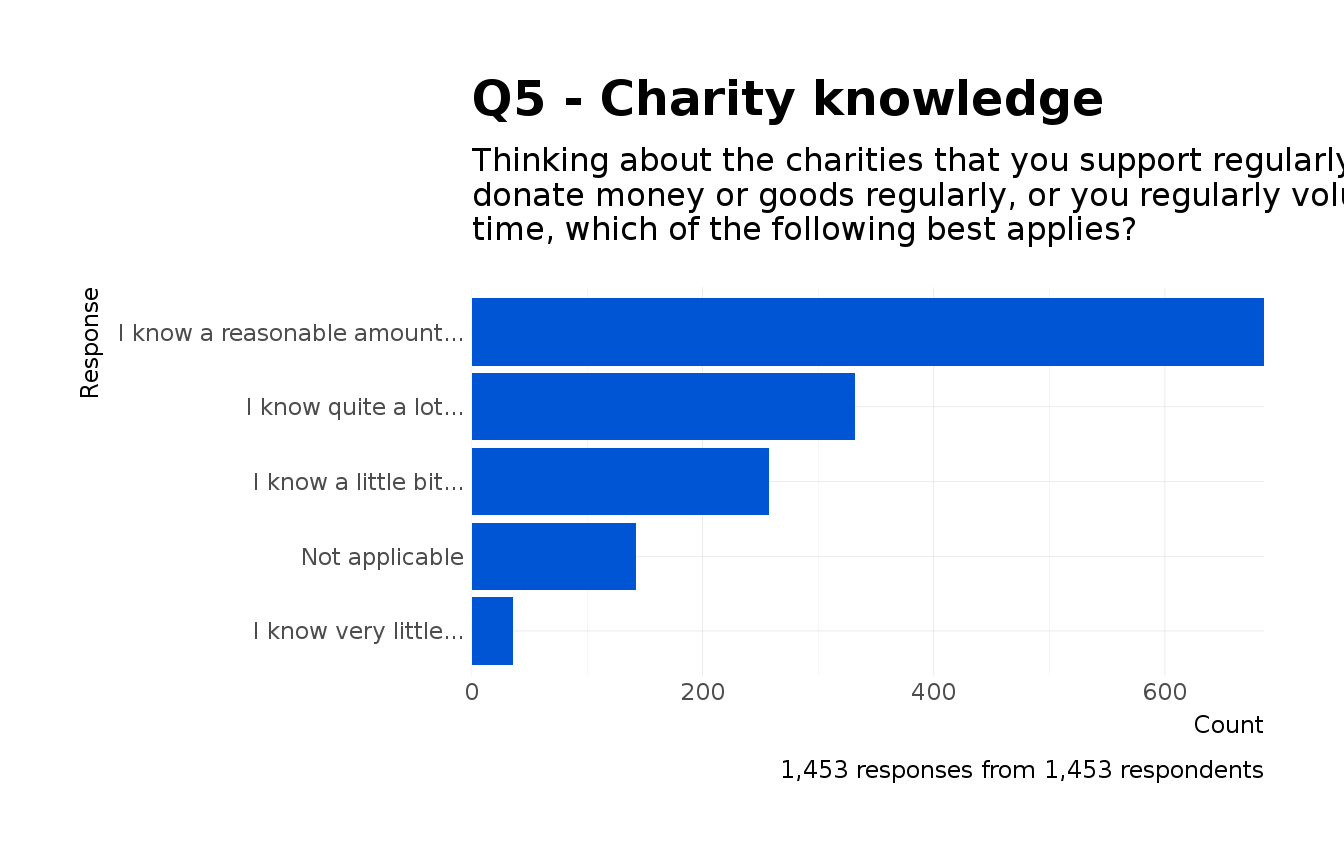 Satisfaction levels amonst supporters (donors and/or volunteers). There it is evident that the public is relatively satisfied with an overall mean satisfaction score of 7.5 and median of 8. 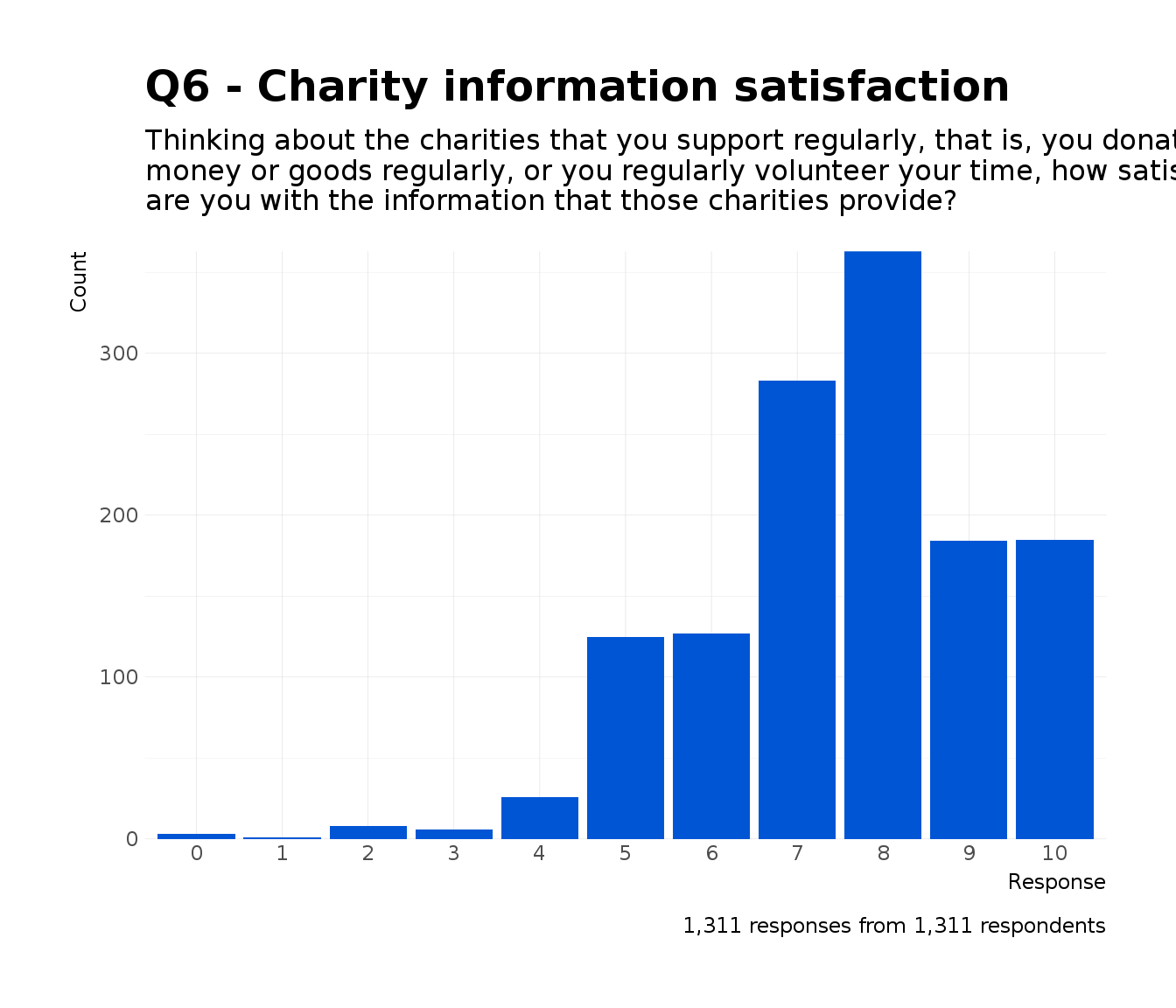 Overall trust for charities appears quite healthy in the 2013 study with charities being ranked 3rd, with a trust score of 6.6, after Doctors and Police. It is quite interesting to observe that charities rank higher than the High Court, the Reserve Bank and the ABC. 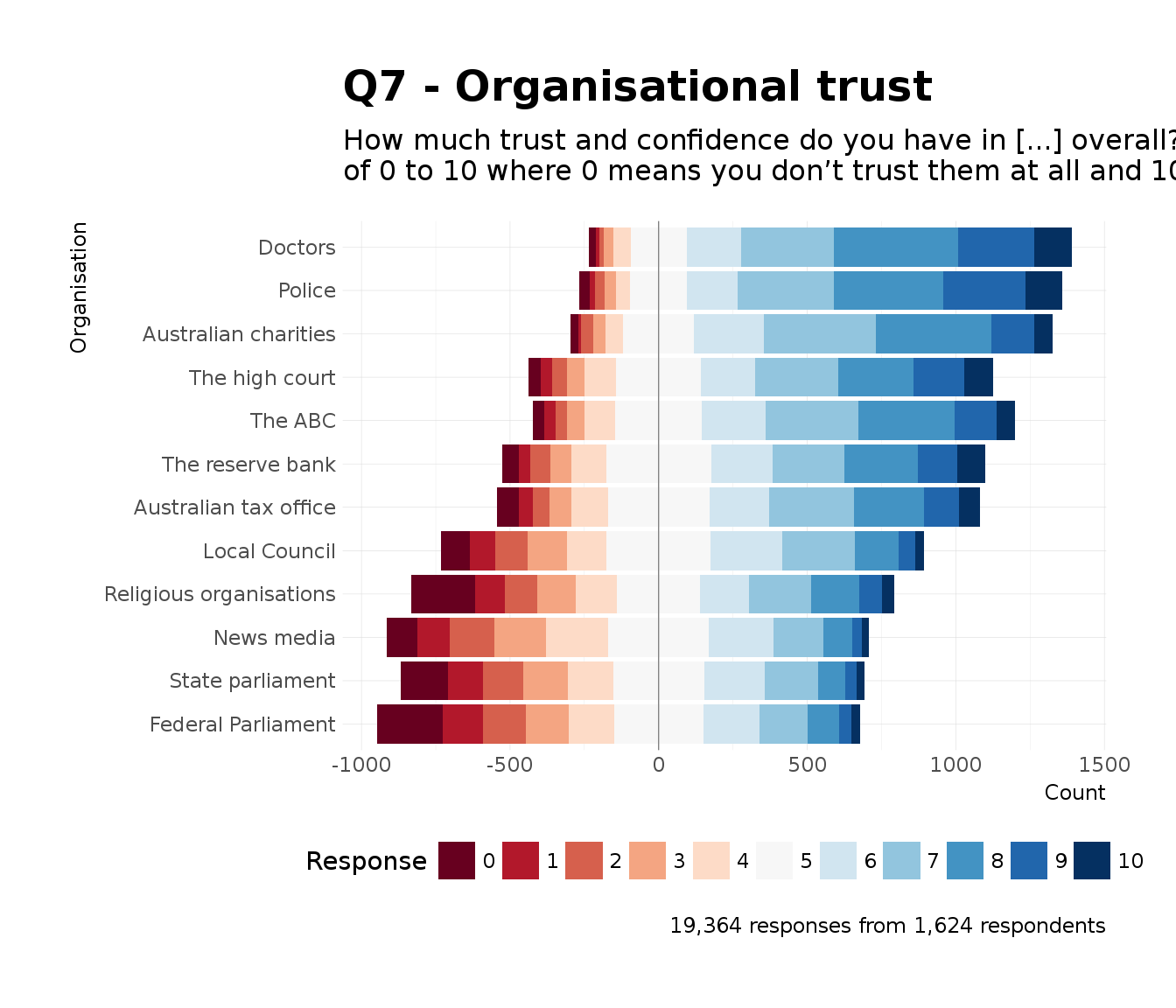 Certain factors seem to influence trust, and in subsequent posts it will be interesting to model if any of these statements correlate well with higher trust levels or not. As a side note it is worth being conscious that two of the statements start with “I don’t trust…”, rather than all the others that start with “I trust…”. 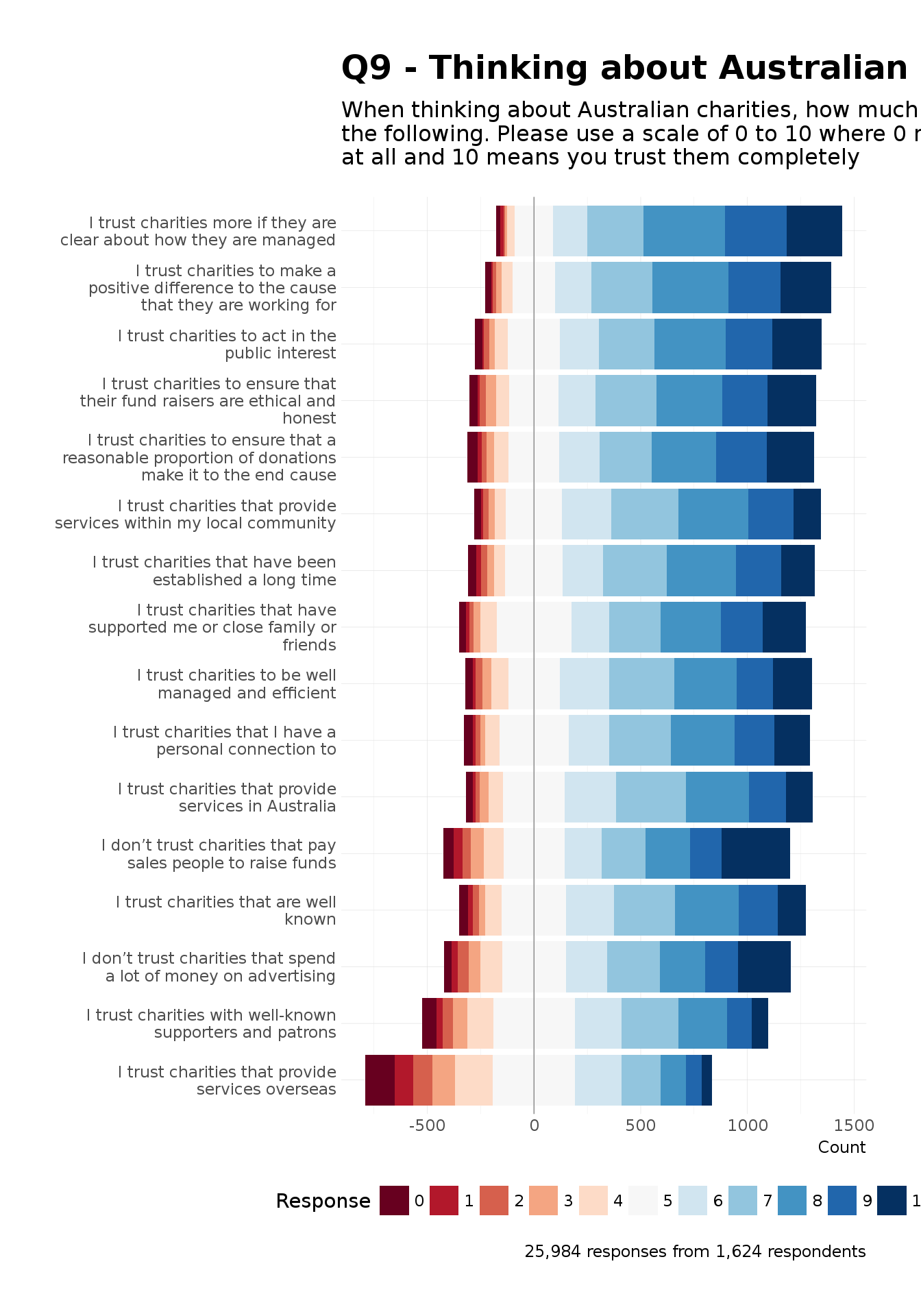 Question 11 is broken down into two parts. The first part looks at the importance of certain aspects of information. The second part of the question looks at how charities perform at meeing the expectations of importance. 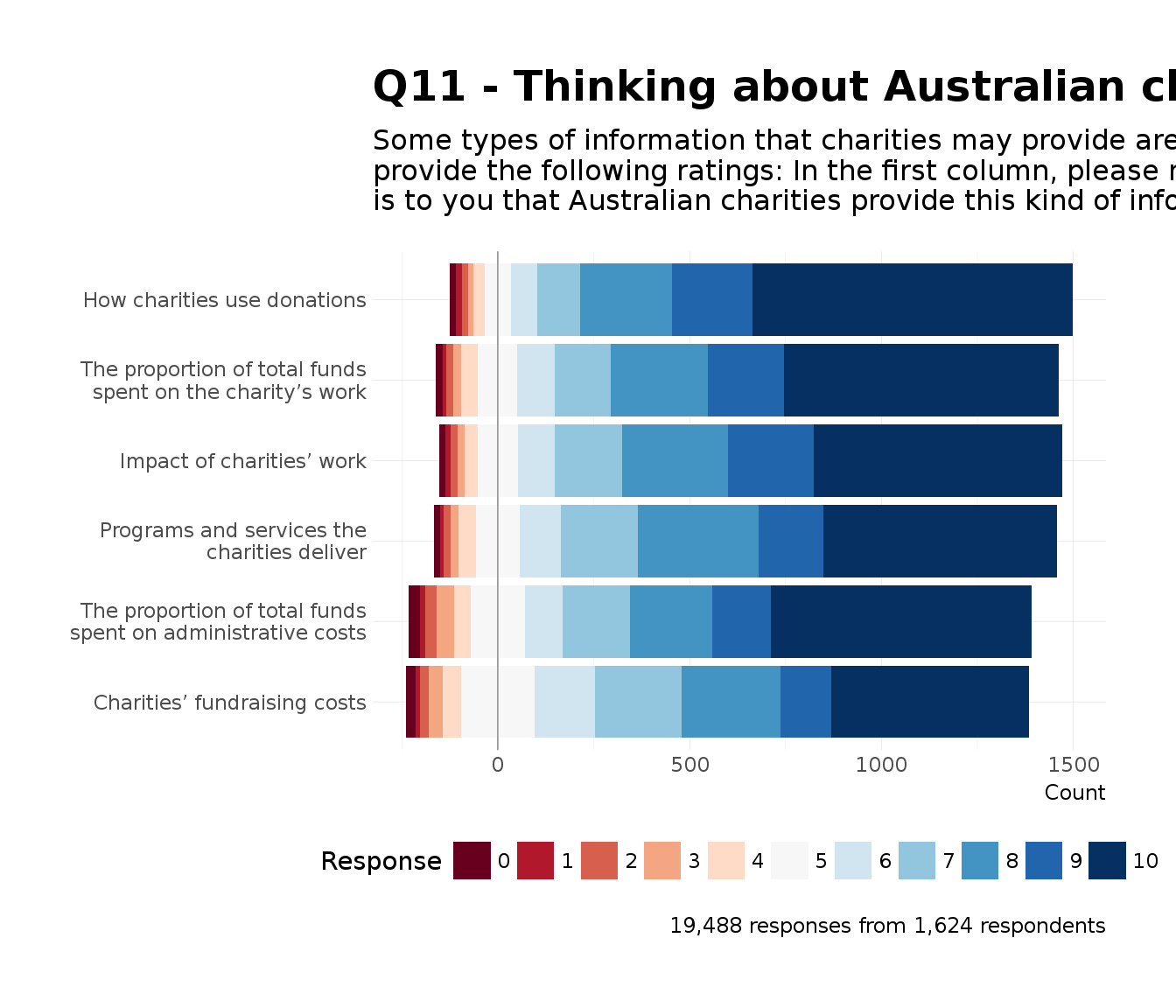 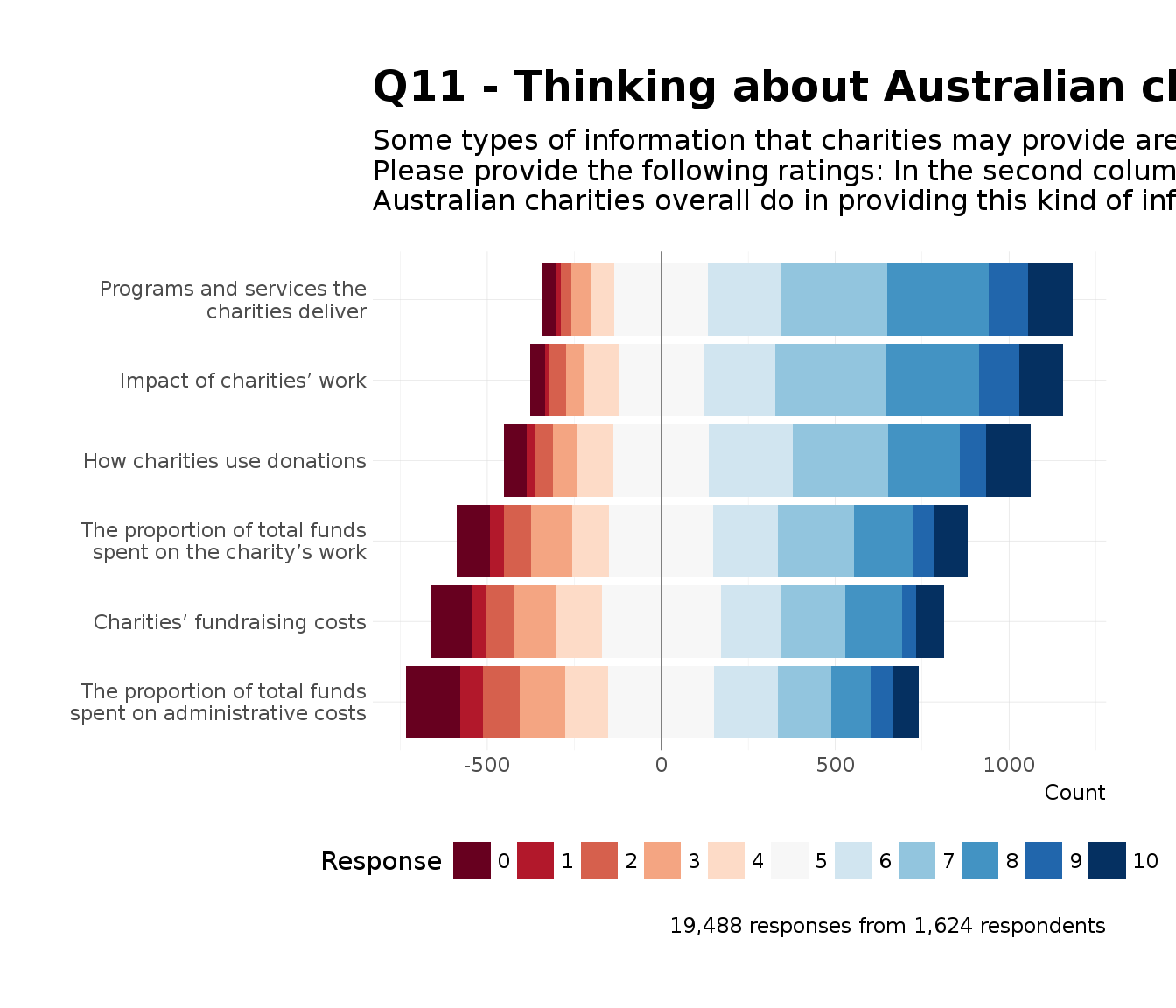 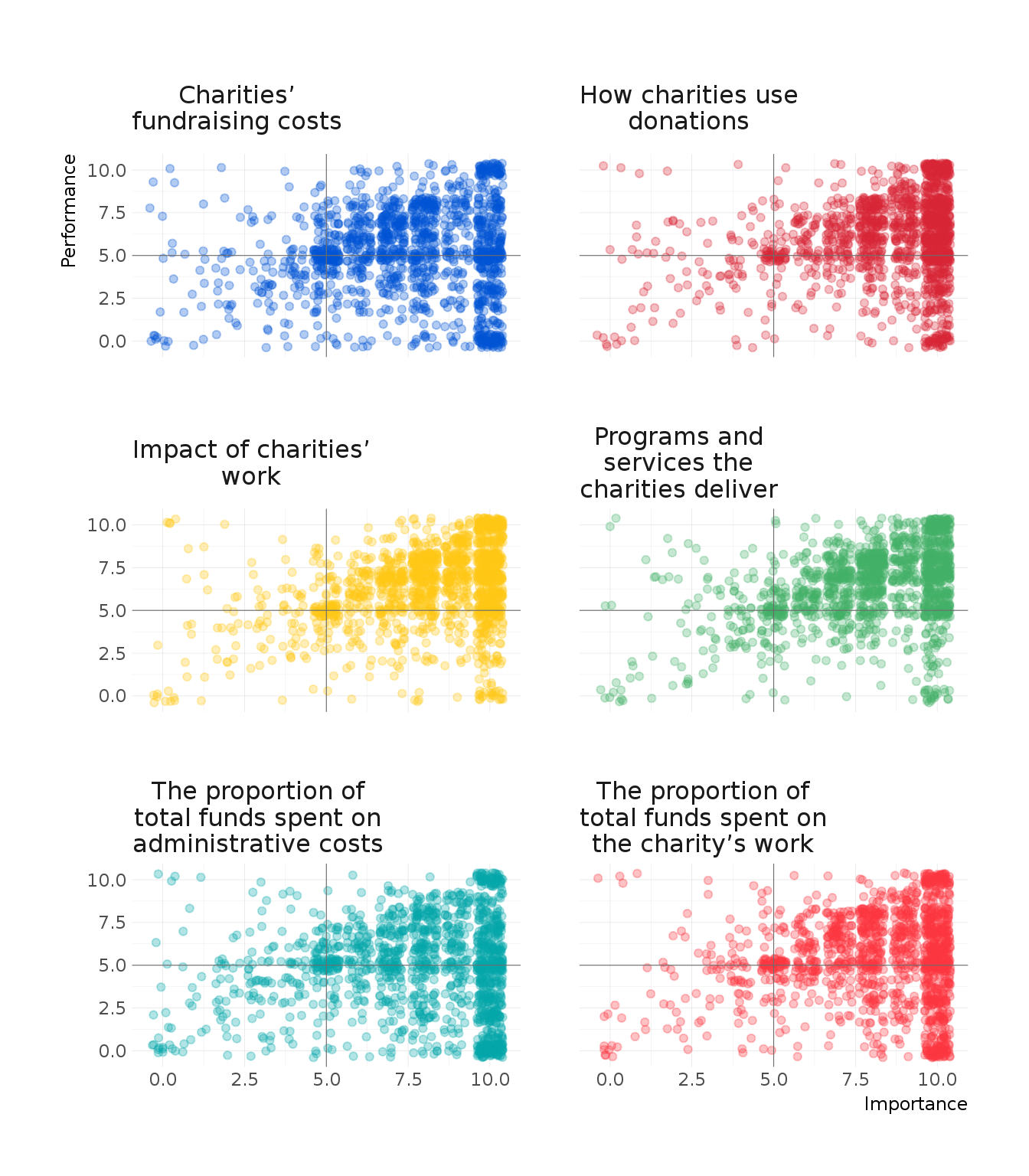 Finally within the Trust & Confidence section of the survey, Question 12 looks at how someone might take action if they had a concern with a charity. 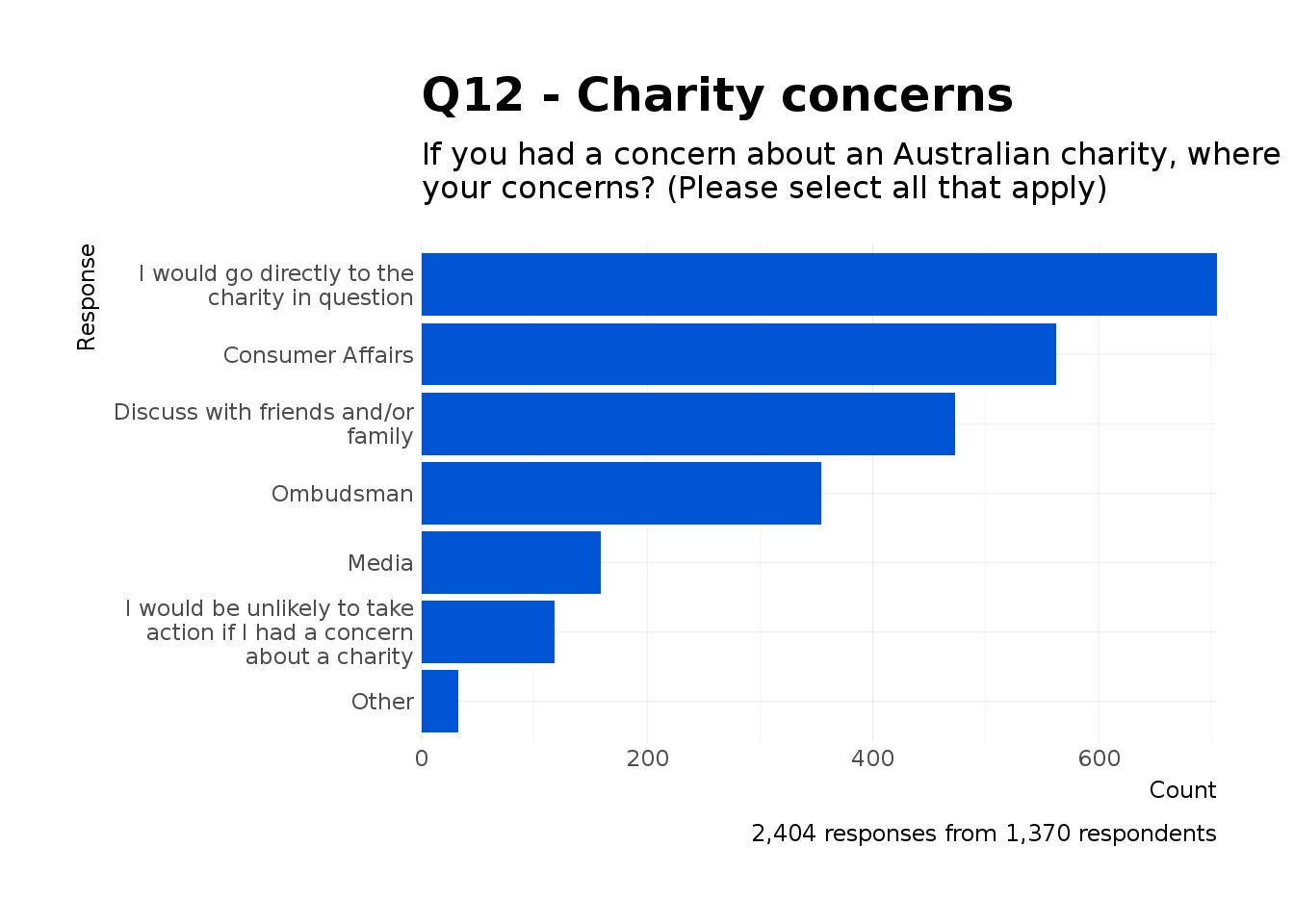 The raw data on it’s own doesn’t provide the most interesting story, however it does start to prompt some specific questions to investigate further. I think these datasets will provide some good opportunity for some interesting analysis, particularly as we look to combine multiple years to assess the change over time.